Don’t forget about those girls taken in Nigeria by Islamist militant group Boko Haram. There were hundreds of Nigerian schoolgirls taken from their dormitories.

Just northeast of Yorubaland in Nigeria was the Nok Civilization which is strongly related to the Yoruba and considered by anthropologists to have been the artistic mother culture of all West-Central Africa medieval kingdoms. The Nok civilization thrived between 1000 bc and 300 ce. Their life-size terracotta statues are amongst the most spectacular of classical antiquity anywhere in the world.

There are numerous different signifiers for Yoruba facial markings depending on the design (such as status, initiation, etc), but one overarching symbolism was for them to mimic the appearance of gills. This is because in Yoruba cosmology the ocean is the principal symbol of the subconscious world. Therefore, gills on the face suggests the ability to “effectively breathe in the subconscious world.”

In West Afrika, the ability of women to walk with large loads atop the head was considered a demonstration of balance. Balance is deified as iwapele. This means “balanced character.” It has been misinterpreted by Oyinbo to mean “good character,” but good character is called iwarere. Iwapele is something beyond just good, but the balance, the harmony, the grace. It is not goodness, but balance that is the nature of the universe. Balanced character, iwapele, is perfection.

Mental-Slaves of Eurosupremacism are angry that I ask Yemoja to drown anyone who supports blasphemous images of her. I do it unapologetically because the Orisa are not docile beings. Even your Christian master’s angels killed those who blasphemed against their god. The orisa are to be evoked to destroy our enemies. Oya, Ogun, Ochosi, etc are all considered warrior deities. However, the itan are clear that even Obatala and his wife Yemoja had to fight too.

We are not in a MLK march. When someone tries to steal my ancestors (which is what they are doing by changing her hair and skin) I take that as trying to steal my soul which is more valuable than my body.

The reason mental-slaves don’t understand this is because they don’t understand the severe power of imagery, it is the most powerful force on earth. This is why it belongs to Osun. It’s as if you guys just praise Osun but never studied her itan. The image is a major power and must be protected. Read her oriki for Olodumare sake! This is not a game. This is not an attack on European practitioners of Ifa; as long as they honor the pure Black image then they are alright with the orisa. It is those who dishonor the Orisa’s image (many of them mentally enslaved Negropeans), that will feel the wrath of the Orisa.

Because Blacks have found peace in their 400 year enslavement, many of them don’t want to harm someone that harms them. All they know is passivity. That’s why European Descendants use you like a toilet tissue. In 2014 if you are still so passive against Eurosupremacists, you deserve all of the oppression they give you.

And so yes, I wish death to those that blaspheme my ancestral deity AND I do not apologize.

In the name of Ogun I breathe
because I do not ignore the reality of war. Ase. 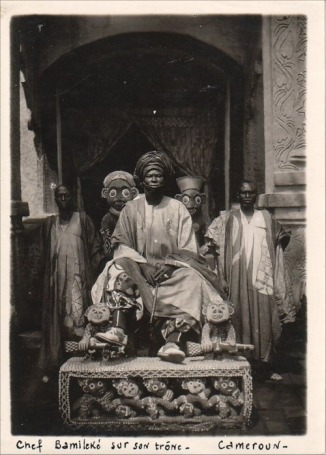 The Odu Ifa teaches that the point of life is to become God; we only become God through sharing.

(below is a medieval bronze plaque from the Benin Empire in modern Nigeria. The Benin Empire (who referred to themselves as Edo) was a sister civilization to the Yoruba. This plaque depicts the Oba (king) and citizens sharing food brought back by the hunters. While the Oba holds on to the dangerous horns, the citizens hold on to various parts of the animal) 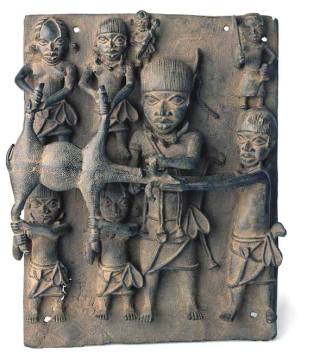 Here’s another one of my favorite Rejected Princesses — Nzinga Mbande, 17th-century African queen of what is now Angola.

She began her political life as her nation of Ndongo was fighting off a Portuguese invasion. Her brother, a by-all-accounts wimp, could not bend over backwards far enough for the Portuguese, and once he ascended to the throne, the Portuguese just tossed him in jail and took over. Nzinga approached the Portuguese and demanded her brother’s return and that they leave Ndongo. At their meeting, in a sign of disrespect, the Portuguese offered her no chair to sit in, instead providing merely a floor mat fit for servants.

In response, Nzinga ordered one of her servants to get on all fours, sitting on her as she would a chair. After the negotiations concluded, she slit her throat in full view of everyone, and informed them that the Queen of Ndongo does not use the same chair twice. Shortly thereafter, the Portuguese agreed to let her brother go.

With her brother now safely back home, she proceeded to murder him in his sleep, kill her brother’s son, and assume the throne herself – because if you’re going to do something right, you better do it yourself. From there, she moved south, conquered the infamous ruthless cannibal tribe known as the Jaga, made them her slaves, and waged war on the Portuguese for THIRTY FIVE YEARS.

Rumors of her badassness grew increasingly outlandish throughout her life. By some accounts, after killing her brother’s family, she ate their hearts to absorb their courage. As a pre-battle ritual, she was rumored to have decapitated slaves and drank their blood. It is widely-accepted that she maintained a 60-man-strong harem throughout her life — men who, by many accounts, would fight each other to the death for the right to share her bed for the night. She also apparently dressed some of them like women. Conversely, she staffed her army with a large number of women warriors.

After decades of killing the Portuguese, they eventually threw their hands up and negotiated a peace treaty. She died several years afterwards, at the ripe old age of eighty. There are statues of her all over Angola to this day. In fact, her outfit and axe are derived directly from one of those statues.

GÉLÉ IS the Yoruba word for a head tie or a head wrap. It is an elaborate head tie that has great cultural and historical significance to the Yorubas of Nigeria and indeed to many other African communities.

It symbolizes status, which can include class, marriage and the harmony that exists between a husband and wife in their home, history (in Ijebu, a city in south western Nigeria, a specially dyed purple gèlè is worn by grandmothers to signify the birth of a child) and fashion.

It’s gloriously eye-catching design makes it a must have fashion item at traditional events like weddings. And it’s no surprise that it has earned the name “jewel of headties”– a fact that is alluded to in Yoruba proverbs. When tied well it is seen as a crown, something majestic.

And like a scarf, it can be also be casual or elegant.

Gèlè has been increasing in popularity over the years.